While it may be easy to see when a claim has been rejected, it is often more difficult to understand why a claim was rejected.  This article will show you how to read the claim history to gain a better understanding of how to fix a claim to be reimbursed. 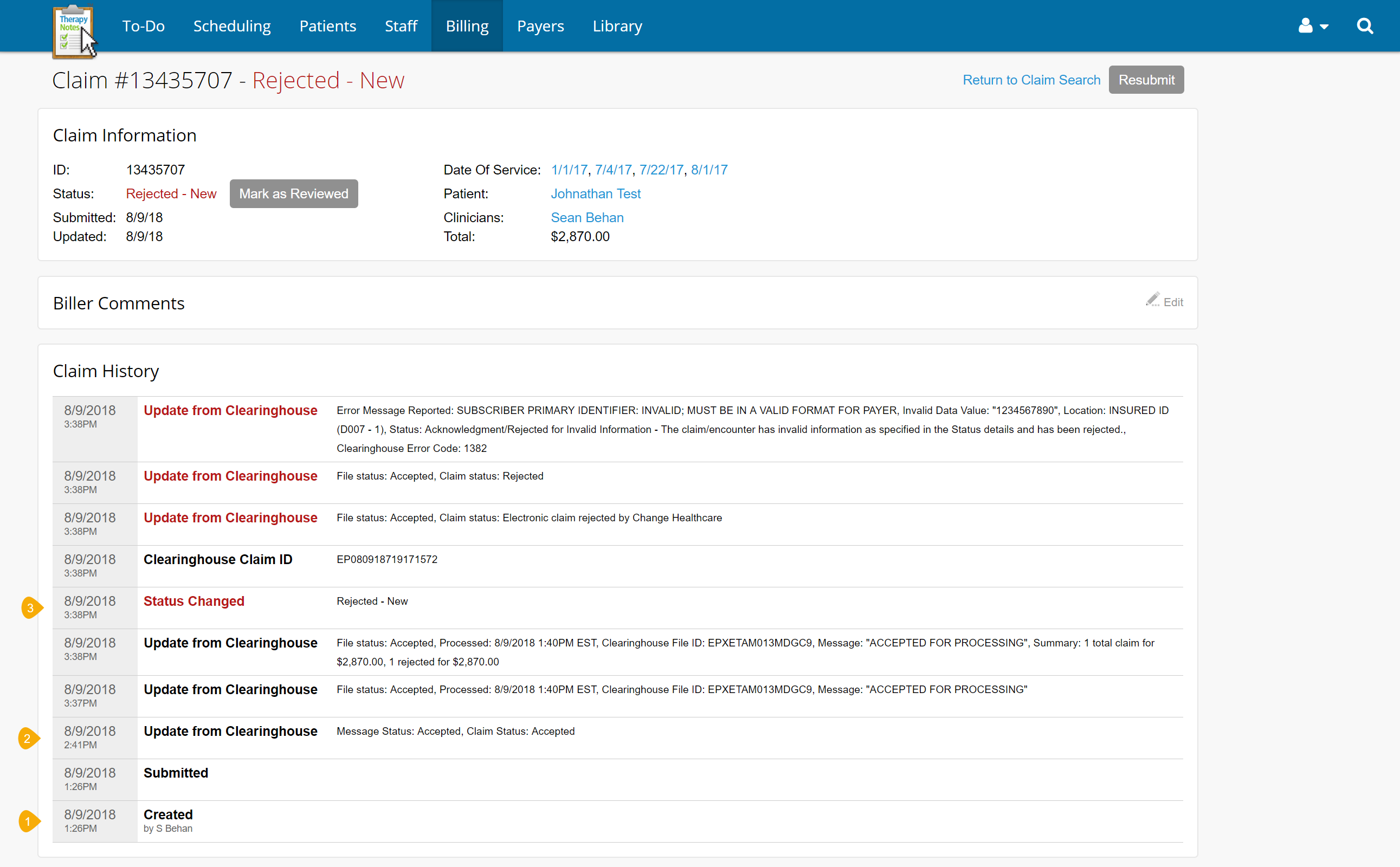 1 - Created: This shows the time and date that the claim was originally created in TherapyNotes.

2 - Update from Clearinghouse: This is a message from our clearinghouse partner (Change Healthcare) about the status of your claim.  Early status updates will include messages about your claim being accepted and processed by the clearinghouse.

3 - Status Changed: This message highlights a changed in your claim status.  When you see this in red, this is a visual indicator that the claim status changed to Rejected.  Above the Status Changed indicator will be one or messages providing additional information about why a claim was rejected.

Electronic claims can be rejected at several places along their journey.  TherapyNotes tries to reduce the frequency by alerting you to information that is missing from claims before you try to send them.  However, there are still several other entities that can reject your claim during its processing journey.  You can infer some basic information about the reason why your claim was rejected based on where the rejection happened.

When you see the message "File status: Accepted, Claim status: Electronic claim rejected by Change Healthcare" you can know that the claim was rejected at the clearinghouse level.  The clearinghouse performs a function called scrubbing on all electronic claims.  Scrubbing is the process of evaluating the information contained in the claim to ensure that it meets a variety of standards.  Some of these are national standards, such as ensuring that the service code submitted is a valid service code or HCPCS code or that the diagnosis included on the claim is represented by a valid ICD-10 code.  In addition, certain payers have contracted for additional validation, such as the format of the member ID.  Generally, if a claim is rejected at the clearinghouse level it is because some portion of the claim information did not meet standards.  Good starting places to consider are:

If all the information on the claim meets the basic validation test requirements done during scrubbing, your claim will then be forwarded to the payer.  Payers generally process claims at two levels - EDI and adjudication.  EDI is the department that receives the claim information from Change Healthcare.  The EDI department performs an additional level of scrubbing, this time specific to the payer.  This is where the payer ensures all of the data on the claim matches what the payer has on file.  If a claim passes on to adjudication, this is when the claim is evaluated to see if it will be paid. Claims rejected at the EDI level may not show up on a provider representative's system if you call in for assistance with your claim.  Not to worry, your claim was still received by the payer.  Simply ask to talk with the EDI department instead for more information about your claim.

If your claim was rejected by the EDI department, there are several things to consider:

If your claim was rejected during adjudication, your best course of action may be to contact the payer directly.  The service you provided may not be covered under the client's plan, or their coverage may not be active.

Whenever a claim status changes to Rejected, one or more messages usually also appear in the claim history with additional details about why the claim was rejected.  As seen in this image, rejection messages typically have a similar format: